You may have seen some of his work around the streets of Perth, now get to know the man behind the spray can!

Who is Dolus? Well, Dolus is a grown up man who started as a tagger, then went on to graffiti. He stopped for a few years but the power of the spray can and new ideas brought him back.

Why did you choose the name Dolus? First of all, I don’t think of myself as an artist.  I looked for a word to express what I do and how I think of myself, and I arrived at Dolus, a Latin word meaning: trick, device, deceit, treachery, trickery, cunning, fraud.

Is it hard to remain anonymous & have you had any close calls? To be honest when I started to paint again, I didn’t mind being known by some people because I wasn’t doing much on the streets. But now I think differently and wish no one knew who I was, just a few people know my real name, and hopefully it stays like that. Close calls, you always have them and especially me because I go out on my own, so when I’m painting or putting up a poster I can’t really see what is happening around me. Once at like 3 am I was walking in Northbridge and I walked in front of a guy who was smoking weed, and I asked him if he could do me a favour, he gave me a puzzled look, then I explained to him what I was going to do, and he kept an eye out for me, while I painted my R2D2 spray can piece. There are some more examples but I don’t want to be even more boring! 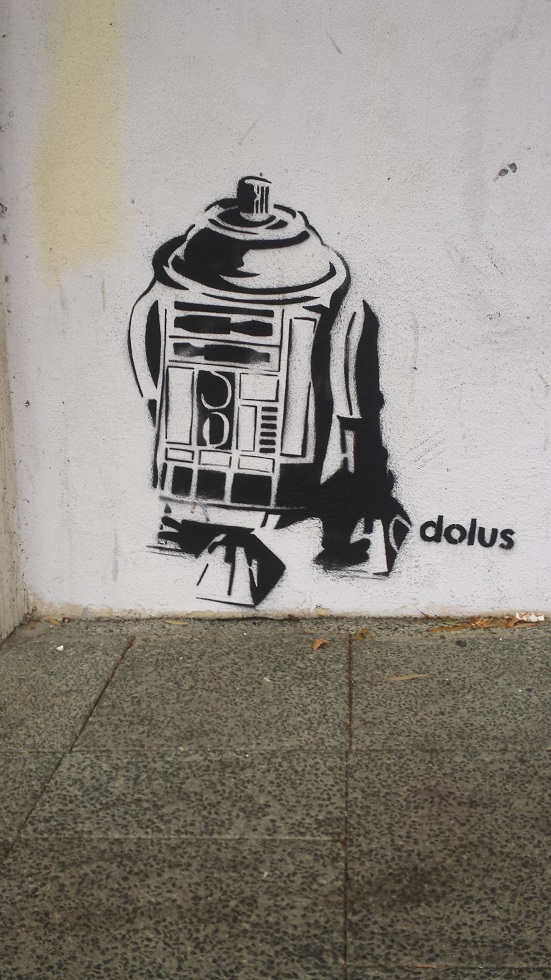 What inspires your art? Well like I mentioned before, I started in school doing tags and graffiti, then I got into too much trouble so my parents warned me about what would happened if I didn’t stop, so I did. Now I’m much older, and I think if you are going to intervene on a wall (that is what I call it) you should try to send a message or an idea, make a social comment, get people smiling. Today we all are attached to the fake social media life, and we don’t look around the streets when we walk, so I try to leave treasures for those ones who do look around and give them a picture to share.

What mediums to do use for your art? I mainly use stencils cause of their effectiveness, they are quick to use and easy to understand.

Where would we find you when you’re not painting the streets? From 7am to 4pm at work, I do spend a lot of money doing what I do so I need to work, and when I do go out late for some painting on the streets, it’s usually at 1-3am and I still go to work the next day. Sucks, but that’s the way it is.

Anything else you would like to say about Dolus art? Just keep your eyes on the walls because you will see some amazing art, from real artists and myself, and also because sometimes I leave free stuff on the streets! Support your local artists, go to galleries and buy their art stop saying “oh I could do that if I wanted”. And then go to IKEA and buy a canvas print for $200 dollars that has been mass produced. Also learn to appreciate art for itself and the emotions that it stirs in you don’t be like those guys saying “oh look this Picasso is amazing” (I love Picasso by the way) but just because it’s a Picasso they express appreciation for it. And if by any chance you’ve read till here, thanks!   Be sure to keep your eyes peeled on the Perth streets to spot some of his work! Follow Dolus on Instagram @art_dolus